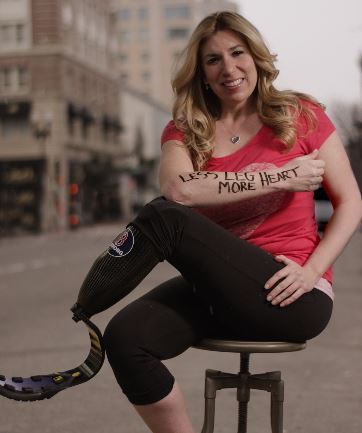 Portrait of Heather Abbott by @dearworld

On this, the one year year anniversary of the Boston Marathon bombing, we revisit some of the lives that were touched by the terrible events of that day and bring you inspiring stories of strength and resilience.

First, we note with pride that Renaissance Alliance Agency Principal, Jeff Helm will be running the Boston Marathon for Mass General’s Emergency Response Fund Marathon Team. He and his teammates, many of whom were caregivers at last year’s tragic bombing, are raising money to support disaster preparedness training throughout the city and state. You can donate to this great cause at MGH Emergency Response Fund Team. You can also read recovery stories and donate to the Boston One Fund or donate blood in honor of the Boston Marathon anniversary.

Here are some stories of a few of the people who were profoundly affected by events last year. They are stories of courage, hope and community.

DEAR WORLD: Boston Marathon is a very moving photo tribute of survivors and responders returning to the finish line. See the short clip below. We opened this post with a portrait of Heather Abbott from this series. She chose the message “Less Leg, More Heart” and explains why:

“…since I lost my leg at the Boston Marathon, I’ve become what the world considers and certainly America considers a handicapped person. And that’s a very new concept for me having been a healthy woman in my thirties before the marathon. I have a new appreciation for people who are considered handicapped and a new compassion for them and the struggles they go through. I think that the experience of losing my leg has made me become more compassionate, so I may have less of a leg now, but I think my heart is bigger because of it.”

For Richard family, loss and love

Amid chaos near finish line, bond was forged

Resources
For a list of help resources and information about coping with PTSD, see Boston Marathon Anniversary Resources. Also, residents and first responders should note that today and again on race day next Monday, free counseling will be available to residents. The counseling sessions, which will be operated by trained mental health clinicians, are available at the Boston Public Library on Tuesday, the anniversary of the marathon bombings, and at Our Lady of Victories Church in Copley Square on April 22. Additionally, counseling will be available over the phone via the Mayor’s Health Line.

Hug a First Responder today
Last year, 3 people died and 16 lost limbs. The total fatalities could have been far worse if it weren’t for the courage and bravery of first responders, many of whom still struggle with the events: First responders still in grip of Marathon’s horror. While the first human reaction to danger is to run away, our first responders run towards it to save lives. Nothing exemplified the difference that they make like their bravery in the Boston bombing. Hug a first responder today!