We thought that we’d make a Thanksgiving post that is just like the way we like our meal: a little of this, a little of that and topped off with some sweets.

One of the pre-dinner traditions for many is the Macy’s Thanksgiving Day Parade. Check out this cool gallery of old-time photos from the early days of the parade – there’s also some fascinating historical info:

The Macy’s Thanksgiving Day Parade started in 1924, though then it was called the Christmas Parade. In its earliest years, entertainment came in the form of animals borrowed from the Central Park Zoo. The first float, Felix the Cat, appeared three years later in 1927. At that point, after the parade was done, officials would just release the tethers and let the balloons float away; there was a $100 prize awarded to anyone who could find and return one to Macy’s. That event was discontinued in 1933 after a guy crashed his plane trying to secure a runaway balloon. 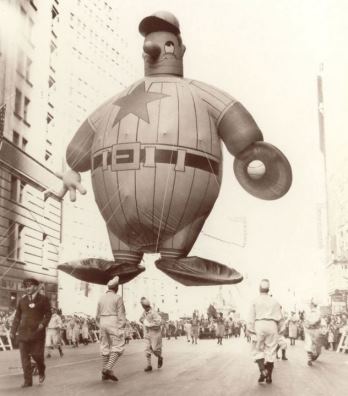 For the cooks, Yankee Magazine offers a Turkey FAQ: A Thanksgiving Cheat Sheet, along with a Thanksgiving Timeline – starting 3-days before your dinner right up until serving time. They also offer 25 Thanksgiving tips.

For some unique recipes, The New York Times weighs in with the United States of Thanksgiving, a collection of recipes that evoke each of the 50 states (and D.C. and Puerto Rico).  For a more traditional take, we turn to Yankee’s No-Fuss Thanksgiving Menu – replete with recipes for Roast Turkey with Cornbread-and-Sausage Stuffing, Giblet Gravy, Creamed Onions, Herbed Mashed Potatoes, Maple Walnut Acorn Squash, Easiest Brussels Sprouts and Julie Sahni’s Cranberry Chutney. Or try traditional recipes with a twist. And for the day after, here are some great Thanksgiving Leftover recipes

The one thing you don’t want on the menu is a kitchen fire – Thanksgiving is the leading day for home fires involving cooking – three times the average number. Review some kitchen safety tips from the National Fire Prevention Association. And if you are considering fried turkey, be sure to see our last year’s post of advice from William Shatner.

OK, we’ll leave you with a few Thanksgiving-related amusements. Have a safe & wonderful holiday!