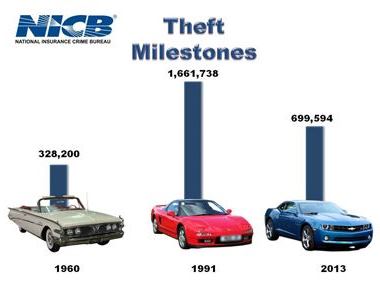 Car theft used to be a major worry for car owners, but today, it’s just a passing concern. Hot-wired cars may now be a thing of the past. The National Insurance Crime Bureau (NICB) reports that car theft has dropped by 58% since 1991, the high point when 1.661 million vehicles were stolen. The improvement is so dramatic that many police departments throughout the country have disbanded their dedicated auto theft investigative units.

In a recent article on auto theft, the Boston Globe reports:

“At its peak in 1975, Massachusetts ranked third nationwide (behind California and New York) in total annual thefts at 91,563, and the state remained in the top 10 states for auto theft until 1992, according to National Insurance Crime Bureau stats. The state ended 2013 with 9,122 thefts.”

Law enforcement and insurance-industry focus helped to turn the tide, but perhaps even more importantly, technology advances have changed the playing field. Transponder keys, immobilizing technologies, and tracking & recovery systems have all contributed to the drop. But criminals aren’t throwing in the towel — they are adapting and getting smarter. Some of the ways they get around things are to steal the transponder itself. Another way is through fraudulent financing. Crooks steal your identity and then secure financing under your ID to buy a new car.

One devious and increasingly common new car crime is called VIN cloning or VIN switching, a real concern for used car buyers. It works this way: Thieves steal a car. Then they locate a similar model and make and copy the vehicle identification number (VIN). The thieves then make and install counterfeit VIN plates for the stolen car. You buy the car complete with paperwork, but one day police knock on your door to reclaim the stolen vehicle. Unless your state offers some consumer protections, you may be out of luck – you still have loan payments but your car was confiscated.

Here are a few clips that explain how it works.

–Check the VINs on the dash, driver’s door sticker, car frame, title documents and service records all match
–Examine the VIN plate on the dash for any sign of tampering
–Look at the CARFAX and check:
—–For a clone alert
—–If the mileage on the odometer matches reported mileage
—–For several registrations between states – this is a red flag which should be investigated further
–Follow our tips for detecting salvage title fraud
–Get the car inspected by a qualified, independent mechanic