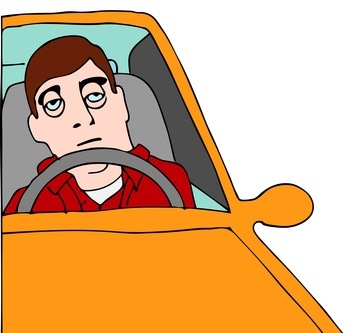 The National Highway Traffic Safety Administration conservatively estimates that 100,000 police-reported crashes are the direct result of driver fatigue each year. According to the National Sleep Foundation’s Sleep in America poll, 60% of Americans have driven while feeling sleepy and 37% admit to actually having fallen asleep at the wheel in the past year.

The terrifying video below shows three different angles of a crash that happened last October when a Michigan bus driver nodded off for a second while driving – he cut a half mile swath of wreckage. Amazingly, nobody was killed.

A 2014 AAA Foundation for Traffic Safety study found that “…drowsy drivers are involved in an estimated 21% of fatal crashes, up from 16.5% from the previous 2010 study, as most drivers drift out of their lanes or off the road.   Drivers themselves are often crash victims who die in single-car crashes.”

Who’s at risk? According to drowsydriving.org, anyone can fall asleep at the wheel, but surveys show that sleep related crashes are most common in young people, especially men, adults with children and shift workers. Commercial drivers and people with undiagnosed sleep disorders such as sleep apnea and acute insomnia are also at greater risk for fall asleep crashes.

Warning signs of drowsy driving include:

Here are some tips from drowsydriving.org to help prevent drowsy driving