Many people procrastinate when it comes to saving for retirement … but the earlier you start, the more compounding interest works in your favor.

Financial Engines conducted a survey to better to better understand why people procrastinate on their retirement savings. They learned that most of those those surveyed identified 25 as the right age to begin planning and saving for retirement, but that most had started much later than that: an average of 10.6 years later than they thought they should have.

They attributed that delay in retirement savings to various reasons:

While people think they can make up for it later — and sometimes they can — every year of delay squanders the advantage of compound interest. To reach the same savings goal, they would need to save more each year to make up for any missed investment growth, as well as any missed employer matches, if available.

The following graphic depicts the percent of income that would need to be saved each year to reach the savings goal. 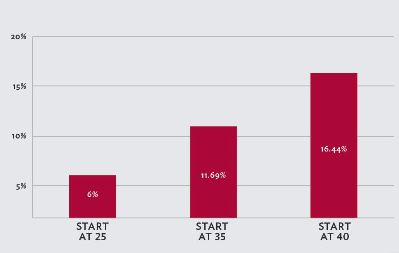 You can learn more about the benefits of time by playing with with this compound interest calculator.

But the better-late-than-never rule comes into play – even if you missed out on the advantage of an early start, the sooner you do begin the better, so don’t delay. Here are some tips offered by  Financial Engines for late starters:

For more information on the cost of procrastination, see their complete infographic.