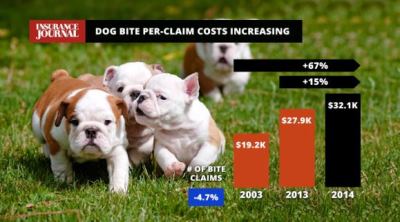 May 17-23 is Dog Bite Prevention Week. The USPS and its partners in the annual promotion report that “… small children, the elderly, and Postal Service carriers — in that order — are the most frequent victims of dog bites. It is also stated that the number of dog bites exceeds the reported instances of measles, whooping cough and mumps, combined. Dog bite victims account for up to five percent of emergency room visits.”

But that is only part of the story: Insurance Information Institute reports that dog bites accounted for more than one-third of all homeowners liability pay outs last year. Ouch.

If you have a dog, it’s your responsibility to train, control and socialize your pet to minimize the potential for dog bites. It’s also just plain smart from an economic point of view, as you can see by claim costs. And whether you have a dog or not, it’s important to lean about how to prevent bites, how to train kids to be safe around dogs, and what to do if you are bitten. Here are some resources: