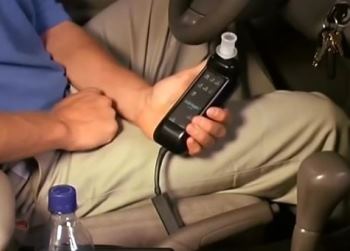 Since July 1, if you are found to be driving under the influence (DUI) in Connecticut, you will be required to install an ignition interlock device (IID), An IID is a type of breathalyzer that requires a breath sample before the car will start. (See the short video from LifeSafer in this post to learn how and IID works.) The car will be immobilized if the sample is over .025. Previously, installation of these devices was only required of repeat offenders, but now the law extends to first time offenders too. According to MADD CT, states with IID laws have seen a 40% decrease in alcohol related fatalities.

“The duration of time in which the IID must be installed is dependent on whether the offender is 21 at the time of the incident, whether they are a repeat offender, and the result or refusal of the blood alcohol test taken.

This law will affect up to 6,500 first-time offenders charged with operating under the influence. The previous law did not require those who entered a diversion program to use the IID, but the new law now requires all offenders to.”

This is in addition to any fines and suspensions that may be imposed. It’s up to the offender to pay for the device and its installation.” A device costs about $75 to install and $75 per month to maintain. They also require about $275 in DMV fees.”

DUI conviction also have a severe impact on insurance rates
In addition to any state fines and penalties associated with a DUI offense, remember that a DUI conviction will be very costly to your insurance rates, too. Just how costly will vary, depending on the circumstances of the offense, your age, your driving history, your state law and your insurer. You may be designated as a high-risk driver, limiting your insurance options – some insurers may refuse to insure you at all. The amount of a surcharge can vary by insurer and the duration of such a surcharge will vary by state law. Usually, it will negatively affect your rates for at least three years and as many as 10 years, in some states.

Note: DUI is also sometimes referred to as OUI (operating under the influence) and DWI (driving while intoxicated).