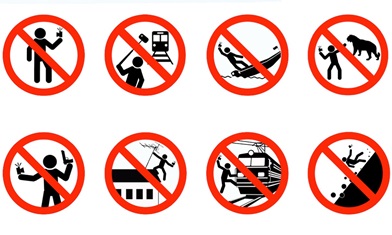 From a Russian Selfie Safety campaign

Globally, more people have died in selfie-taking incidents this year than were killed by sharks. Nope, that’s unfortunately not a joke. So far this year, here’s the toll: Selfies, 12. Sharks, 8. From live grenades, bull chases and clifftops: people are dying to take selfies.

And that says nothing of the scores or injuries and near-misses that have occurred while trying to get the ultimate selfie. No matter how strong you think your selfie game is, you probably can’t outrun a bear. One phenomena that is driving park rangers crazy is the number of people who get way-too-close to wild animals so that they can snag a shot with a bear, buffalo or moose over their shoulder. So many people are doing this that at least one park in Colorado closed down to visitors to protect both the bears and the selfie-taking people. Park rangers say that getting close to a bear, bison or any wild animal is highly risky – and turning your back on them is an invitation to an attack.

In Russia, where there have been more than 100 selfie-related injuries, the interior ministry launched a Safe Selfie campaign with a motto: “Even a million ‘likes’ on social media are not worth your life and well-being.” Our post graphic shows the situations the public safety poster suggests that selfie takers avoid.

The dangers of selfie taking have been exacerbated with the popularity of selfie sticks – leading an increasing number of tourist and public venues to ban selfie sticks for for insurance liability reasons.