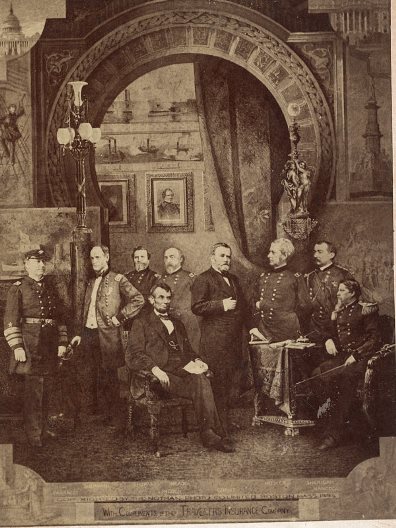 Photo from the library of Congress

Photoshop has nothing on the photo montage specialists of the 1800s, who were adept at “trick photography.” Witness this historic Civil War era image title “Union Commanders” from the Library of Congress. Linton Weeks of NPR’s history department took a closer look, noting that although the photo is dated 1884, several of the people in the photo had been dead for decades by that point.

It turns out it the “photo” is an example of an early insurance ad – from one of our insurance company partners, no less: A caption on the photo says “With compliments,” signed by Travelers Life and Accident Insurance Co. There was a similar image produced of Confederate generals.

NPR asked the folks at Travelers about the photo:

“The photo-artist “used individual photographs of the Confederate commanders and created a composite picture of them together,” she says. “The figures were cut from the print and pasted on a painted background. This process would be similar to using software like Photoshop in today’s terms to place images together in one photo.

“The idea of using the pictures as advertising came from Maj. Edward Preston, the Travelers superintendent of agencies, Davidson says. “The first copy of the ‘Confederate Commanders’ was delivered to Jefferson Davis by the Travelers representative in Montgomery, Ala. Copies also were sent to all the living generals in both pictures.”

She adds that the success of the ad campaign prompted more composites, including “Famous American Authors,” “Eminent Women” and “Famous Editors.”

Whether using photos or illustrations, trade cards were a common form of advertising in the 1800s for all types of products and services. Life Insurance was a pretty common theme. Explores some fascinating examples of Victorian Trade Cards.