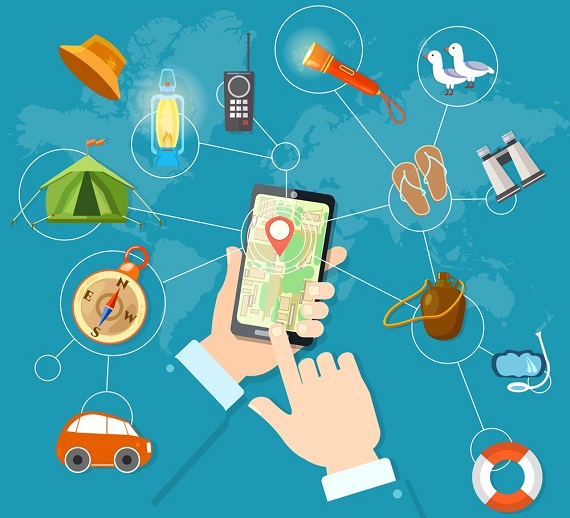 Smartphones are cool. These little slabs of glass and circuitry have rapidly made themselves the most useful of tech toys (and the most pernicious of time-sinks, as anyone who’s ever nursed a Candy Crush habit will testify). But a smartphone is only as good as the software it’s running, and most of that software comes in bite-sized chunks called apps. Some apps duplicate functions found on our tablets, laptops, and desktop computers, doing everything from word processing to photo manipulation to web design. Other apps are for fun and for friends, like texting, multi-player games, and popular social apps like Twitter and Snapchat. (Snapchat is still cool, right?)

While many apps are free and supported by in-app advertising, some of the more useful apps cost real money. In general, the more productive an app makes you, the more likely you are to have to pay for it. But there are exceptions! Many government agencies and non-profits offer apps that are both useful and free, so let’s take a look at some of those.

We’ll start with the motherlode, the official app repository of Uncle Sam himself: USA.gov! From finding housing to staying in touch with astronauts, the US government is now in your back pocket (and not just to get at your wallet). Check out the list of available apps freshly updated for 2018. The CDC also has health-related apps worth checking out. There’s quite a few, ranging from a child development Milestone Tracker to a “Can I eat this?” app for travelers to foreign lands.

Not to be outdone by the Feds, many states offer free helpful apps, too. They range from tourist guides to public transit and everything in between! Here’s New York  and California. Other states don’t have their apps so well-organized. You’ll have to get your google on to find them. For you policy wonks, the National Conference of State Legislatures (NCSL) has a few state-specific apps to help you keep track of pending legislation.

The American Red Cross has quite a few useful apps as well. They range from instructions in first aid (including first aid for pets!) to emergency bulletins to scheduling blood donations. Find all the Red Cross apps listed in one place.

Speaking of pets, the American Society for the Prevention of Cruelty to Animals (ASPCA) has an app to help you in pet emergencies, locate lost pets, and maintain your pet’s health records..

Now that you’ve got the doggos and fluffsters squared away, how about the birds? There’s a gaggle of birding apps out there, but one of the best happens also to be free! Merlin Bird ID is from the Cornell University Department Of Ornithology. It helps you identify and track birds by appearance, call, habitat, and season. It’s a great app for new birders, walking you through a five-step process of simple questions to identify the bird you’ve sighted. Or snap a photo of a mystery bird and Merlin will identify it! Listen to bird calls, get acquainted with the birds in your area, and learn which migratory visitors are just passing through. All for free! Plus, using Merlin sends birding data back to the ornithologists at Cornell, helping them track migratory patterns and changes in habitat. It’s available for iPhone and Android.

But don’t get lost in the woods while you’re out there chasing down yellow-bellied sap-suckers! The clever app What3Words has divided the planet (yes, the whole planet) into 9’x9’ squares and assigned each individual square a three-word name. Once you know your three-word identifier you can use it to direct anyone to your location to within 9 feet away! Anywhere on the globe! It’s compatible with Google Maps, Apple Maps, Navmii, and Citymapper, and is increasingly being built in to many car navigation systems. Useful in developing countries without fixed postal addresses, What3Words is also great for having pinpointing your tent at a festival, connecting with your kids at a local festival, finding your friends at an arena, or arranging a group meetup in any big, crowded space. It’s available for Android and iPhone.

We’ll end with an app that you should have on your phone just for emergencies. FireChat is texting app that communicates peer-to-peer via WiFi or Bluetooth. That means no internet connection or mobile phone connection is required. If there’s another device in range, FireChat will leapfrog your message (and any other FireChat messages that have used your device as a node) to that next device, and so forth, propagating messages outward like ripples in a pond, device-to-device. It’s called mesh networking, and in emergencies it can save your bacon. Of course, it only works if other devices are using FireChat (and on iPhones it requires AirDrop, so it’ll only work with iPhones 5 and up). Plus, it’s not exactly what you’d describe as “secure,” though that’s getting better as the app develops. But in a pinch, you never know when it might come in handy, and it doesn’t take up much space. Grab it for Android or iPhone from developer Open Garden.

Finally, don’t forget to check with your local insurance agent or your insurance company to see if they have an app. If you have an emergency, you want to be able to report your claim quickly!