How’s your morning commute? This commuter encountered an unusual peril, a unique example of road rage, with the Nissan Pathfinder coming out on the losing side.

This clip is dramatic evidence of the size of an American bison in relation to a car – pretty formidable. Below is a clip of an Alaskan moose ambling down the highway to give you a dramatic size perspective.

Wildlife and vehicular collisions are pretty common, and while they peak in October through December, they can occur at any time of the year. State Farm tracks wildlife-vehicle collisions, reporting in October 2018:

The 16th annual State Farm deer-vehicle collision study has some good news. Overall in the U.S., drivers were less likely — one in 167 — to have a crash involving a collision with deer, elk, moose, or caribou. Last year’s survey put that chance at one in 162. It is estimated deer, elk, moose, and caribou collisions dropped slightly to 1.33 million in the U.S. between July 1, 2017 and June 30, 2018 — down from 1.34 million in 2017. And, this is despite the fact that there are nearly four million more licensed drivers.

Those odds are in about the same range as being audited by the IRS (1 in 175) so when you think of it that way, it’s worth thinking about how you’d react to this hazard in a driving situation.

The Insurance Institute for Highway Safety tracks fatalities in animal-vehicle crashes, marking 211 in 2017. They include a breakdown by state.

If you see a deer in the road, should you swerve or not? Here’s some advice from safety expert Mike Winterle, who advises you not to swerve.

Here’s some other good advice: 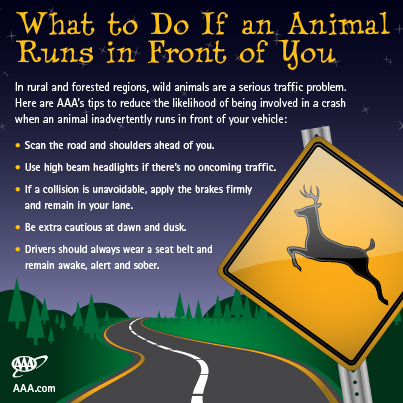 Will the damage caused to the Nissan Pathfinder be covered by their auto insurance? That depends on whether they have comprehensive, which is an optional not a mandatory coverage. See The Insurance Information Institute: Cars and Deer – A Risky Combination; Consider Including Comprehensive Coverage on Your Auto Policy

Damage caused by an accident with deer or other animals is covered under the optional comprehensive portion (not the collision portion) of an automobile insurance policy. Comprehensive auto insurance includes coverage for: fire, theft, vandalism or malicious damage, riot, flood, earthquake or explosion, hail, windstorm, falling or flying objects, damage due to contact with a bird or animal, and sometimes, depending on the policy, windshield damage.

Do you need comprehensive insurance? That probably depends on a lot of factors such as the age of your car and how much you depend on your vehicle. Could you afford to repair or replace it if you have a collision with moose or damage from weather-related perils or human-generated vandalism? Your independent insurance agent can get you a quote and help you think through such scenarios to assess the cost-benefit in your particular situation.