We’ve all misplaced our car keys at one point or another, but are people getting more forgetful?

That would appear to be the case if we review the recent report that the National Insurance Crime Bureau (NICB) issued on car thefts. Thieves are driving away with our cars because we are making it too easy for them by leaving our keys and fobs right in the vehicles!

While car thefts in general are on a downward trend, the numbers of cars stolen due to keys in the car are on the rise. And it’s not just a slight uptick – there’s been a 56% increase since 2015 and an 88% increase since 2013!  Every single day last year, an average of more than 200 cars were stolen due to keys in the car. You can learn more in the NICB press release on thefts of vehicles with keys, along with the short video and infographic, below. 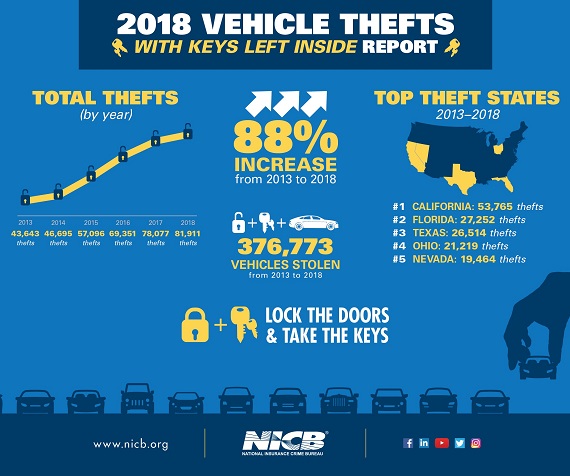 Sometimes the keys or fobs left in the car are not due to forgetfulness – thefts spike in the winter when there are more cars being warmed up in cold weather. Beyond that, NICB doesn’t speculate as to why. It may be because they are quieter. We previously talked about how quieter, keyless cars are related to an increase in carbon monoxide deaths. Beyond that, it’s anyone’s guess: Too much trust in anti-theft and theft-recovery systems? An aging population of drivers? Distracted by our phones as we are powering off our cars? Hard to know.

To prevent this happening, NICB advises drivers to: