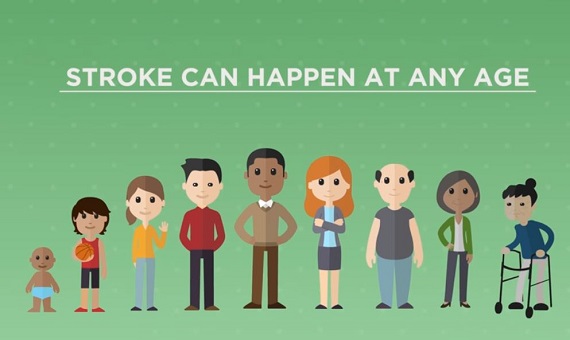 May is American Stroke Month. The recent deaths of beloved filmmaker John Singleton, aged 51 and actor Luke Perry, aged 52, serve as a sad reminder of why awareness of stroke warning signs is so vital. It’s also important to have a response plan for what to do if a stroke is suspected.

Generally, we tend to think of stroke as a medical condition affecting the elderly – and while stroke risk does increase in older years, the reality is that people of any age can suffer a stroke. In fact, health authorities say that the stroke risk for younger people is climbing.

“The deaths of Perry and Singleton underscore the fact that strokes are becoming more common among middle-aged adults. Between 2003 and 2012, the odds of being admitted to a hospital following an ischemic stroke — the most common type of stroke — increased 35.6% among U.S. residents ages 35 to 44. For those 45 to 54, the odds increased 20.5% over the same period, according to a 2017 study published in the Journal of the American Medical Assn.”

It’s important to learn stroke symptoms and act immediately, because with rapid treatment, stroke damage can be limited and the person can have a better chance of recovery. Experts say to think FAST: Facial drooping, Arm weakness, Slurred speech, and Take action, time is vital. The symptoms are ones that we might identify as a stroke in the elderly, but we might not be looking for such symptoms in people who are young or middle-aged. In younger people, these and other common stroke symptoms might be misattributed to intoxication or drug use.

Here’s some good news: an estimated 80% of strokes in the US are considered preventable. There are two primary types of risk factors for stroke:

Learn more about stroke risk factors that are controllable and steps you can take to control them. See also: 7 things you can do to prevent a stroke.

This video depicts an elderly person who is having stroke symptoms and what happens afterwards. It’s well done. Save a life by having a better understanding of stroke and by knowing what signs and symptoms to look for.