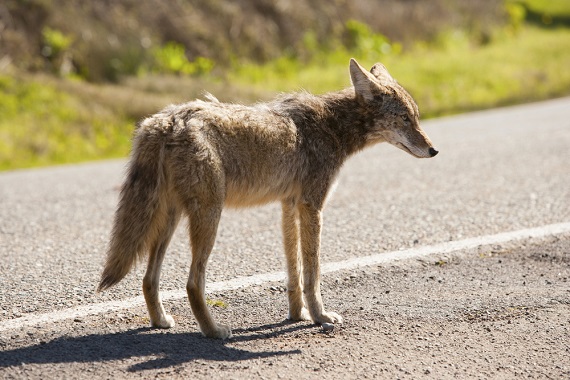 Over the last day or two, headlines are filled with the story of a New Hampshire hero Dad who killed a coyote with his bare hands after it attacked his 2-year old son. There had been reports of coyote attacks in the area for a few days. Authorities caught and killed the animal and testing showed that it had rabies. This is a frightening story, but the Humane Society reports that thankfully, coyote attacks on humans are relatively rare.

Coyotes live in every US state except Hawaii. They are very adaptable to almost any environment – including cities and suburbs. They are scavengers that will eat just about anything. Right now, we are in peak breeding season, which generally runs from January to March.

One of the problems with living close to humans is that coyotes start to lose their fear of people. Instead of hiding, they can become bolder. Many pet owners have heartbreaking stories about having small pets grabbed from their yard by a coyote – or even snatched  right off a leash in front of a horrified pet owner. While coyotes tend to be nocturnal, they can also roam around during the day. They are often spotted at daylight and dusk.

The Department of Agriculture’s Wildlife Services offer steps you can take to reduce the chance of human-coyote conflicts:

This last tip is commonly referred to as “coyote hazing”. The Humane Society has great resources on this topic – see Coyote hazing: Guidelines for discouraging neighborhood coyotes that focus on steps to change coyote behavior. Hazing is method that makes use of deterrents to move an animal out of an area or discourage an undesirable behavior or activity. Hazing can help maintain a coyote’s fear of humans and deter them from backyards and play spaces. The article suggests dog-walking tools and ways to keep them out of your yard.