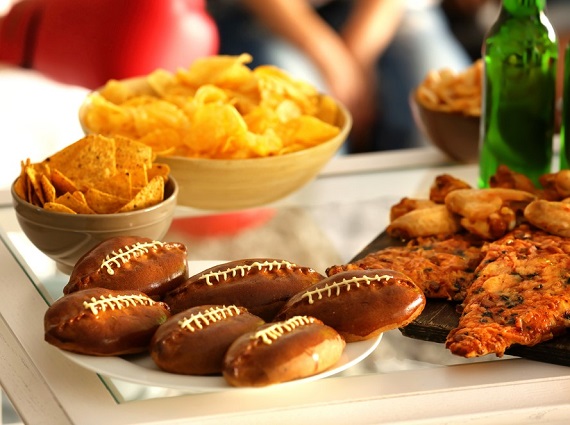 This Sunday, Super Bowl LIV returns to South Florida for a record 11th time. The game will kick off at approximately 6:30 p.m. ET at the Hard Rock Stadium, Miami Gardens. This year’s contenders are the San Francisco 49ers who haven’t won in 25 years vs the Kansas City Chiefs, who haven’t won in 50 years – so it should be a great game with a lot of fan excitement and passion on both sides. We’ve got some ideas for your Super Bowl party ranging from party foods to guest safety … and a few fun odds and ends.

To follow before, during and after the game on Social Media:

Party Snacks:  If you’re are planning a party but haven’t set your menu yet, we have some ideas. Here’s a how-to on building a Super Bowl snack stadium, and here are 12 football-shaped foods. For a few other menu planning ideas, check out 80+ touchdown-worthy party foods and Big Game Bash party recipes.

Party Safety: If you are attending a party, make sure you have a designated driver or alternate transportation planned in advance. Keep an eye on your friends and don’t let them drive under the influence either. If you are the host, you need to plan for more than just the menu – it’s important to look after guest safety to avoid any host liability. The Insurance Information Institute explains:

Here are some hosting safety tips:

It’s a little late for this year’s Super Bowl, but if you are a homeowner who likes to host parties, you might want to talk to your independent insurance agent about umbrella liability insurance, which increases your protection.

If you’re into the Super Bowl more for the party and less for the sport, you might find Puppy Bowl 2020 more to your style. Meet the stars Puppy Bowl stars and starting lineup. See the preview below.

Some people are only it for the halftime show or the ads. Here’s everything you need to know about the halftime show, featuring Jennifer Lopez and Shakira. NBC sports has an overview of Super Bowl ads including the cost of the ads and spots to watch or preview: Check out the Super Bowl Commercials for 2020.

Every year, we also wait for the hilarious annual posting of the NFL Bad Lip Reading – it’s usually posted sometime near the Super Bowl. As of this today, it isn’t up yet, but here’s the 2019 version to get you in the mood.