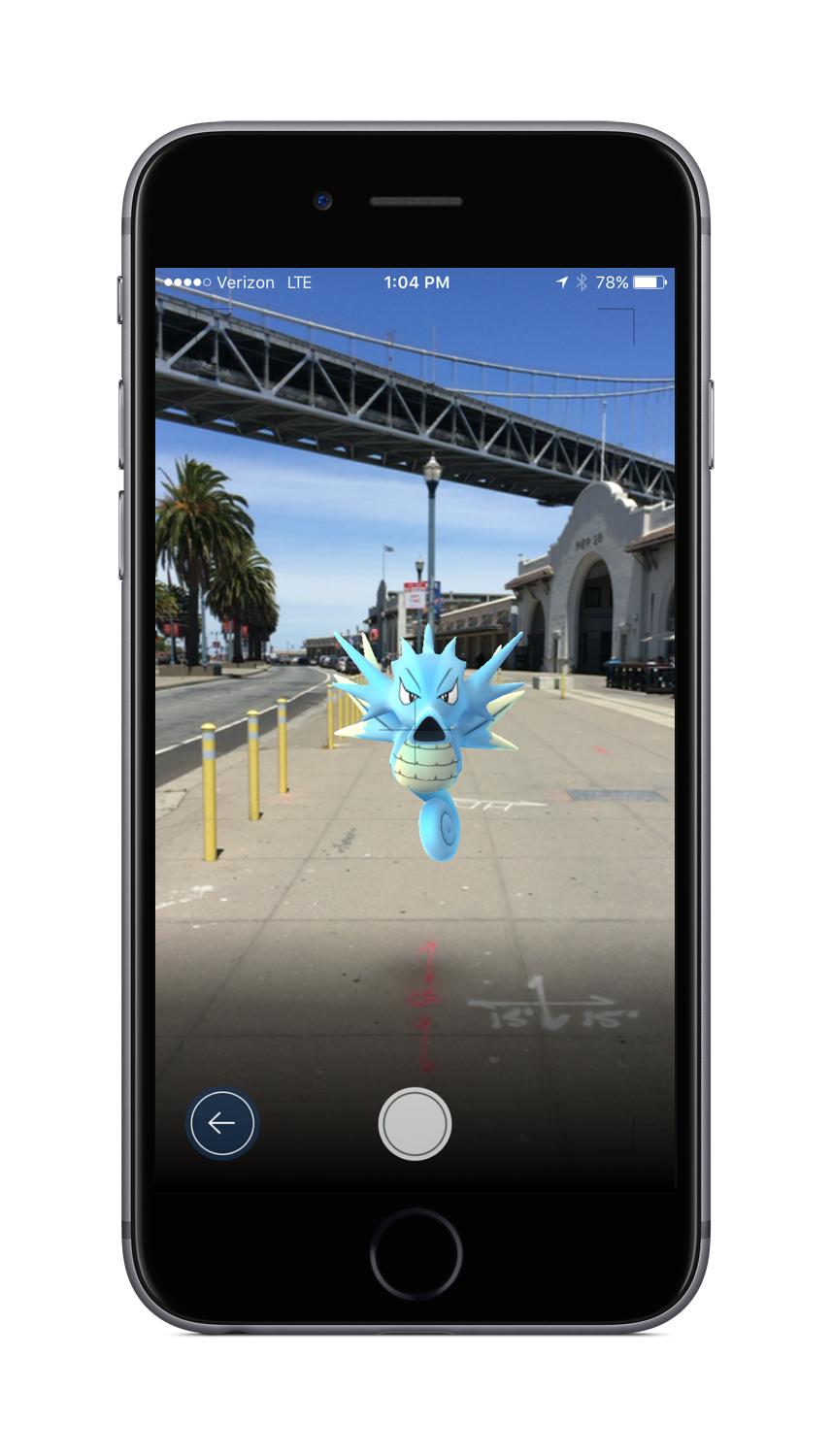 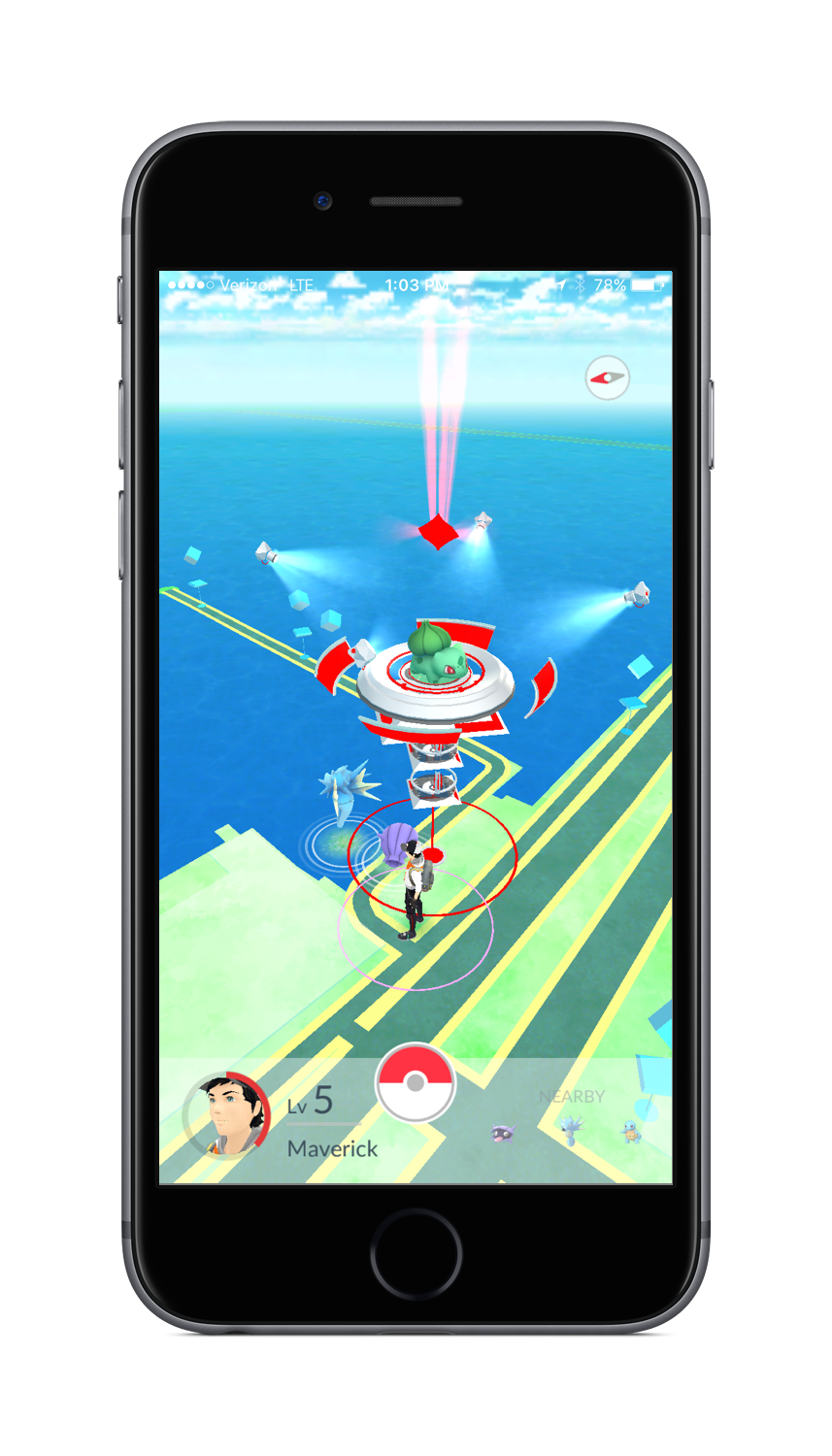 You can be forgiven if you think there is a zombie apocalypse going on. In almost any given public space, crowds of people are wandering around in a transfixed state. Don’t be alarmed, they are just playing Pokemon Go, the new augemented reality phone game craze that’s sweeping the nation. Check out this brief but amusing video clip of Pokemon Go players at Central Park!

On the upside, Pokemon is an unexpected source of health: many people are gaming their way to fitness.

Pokemon are little Japanese monsters that you are supposed to catch – made popular in video games by Nintendo. Now, there’s a new augmented reality version that you can download and play on your phone.
Instead of simply chasing down the monsters on a video screen, you must go out to find and capture the collection of 100+ monsters in a real-world scavenger hunt. In the short time since the game’s release on July 6, it’s taken the world by storm… and it’s having an unintended side effect for many … it is increasing their exercise. It may be the biggest game-related exercise motivator since the introduction of the Wii and the Wiifit .

On the downside, public safety officials, police and gamers themselves are reporting some problems:

It appears some of the main problems are injuries from falls, sprains and strains from players not looking where they were going, walking into objects, tripping or the like. Other gamers complain of sunburns from being outside all day. People are sharing reports of their Pokemon Go injuries all over social media

This news story lists other problems, too. There have also been a few police reports of robberies where criminals have set up fake PokeSpots to target players. And bizarrely, instead of finding a Pokemon monster, one poor user chanced upon a dead body!

Safety officials say keep your common sense about you. Don’t drive while playing – that’s just stupid and would be illegal in most states. Don’t play while riding on bikes or skateboarding, either. Don’t go out walking around alone at night if you wouldn’t normally do so. Be careful about going to neighborhoods or places that you are unfamiliar with. Be careful about intruding on private property. Stay alert for urban an natural hazards in your path. Authorities say to use caution when alerting strangers of your future location.

So like many other popular things, it’s fun but be careful!

Learn more at the Pokemon Go official site  or check out this article with Your biggest Pokémon Go questions, answered.

We thought we’d ease you back to the work week with a fun post on vintage life hacks. The Internet loves “life hacks” – tips, tricks and shortcuts to solve everyday problems or help you increase efficiency. We’ve carried some previously here on this blog – see Handy household hacks: creative uses for everyday products and Everyday products you’ve probably been using wrong.

Back in the olden days (yes, there was life before the Internet, kids), “life hacks” were often called “household hints” and were often featured in newspaper and magazine columns. But before that, in the Victorian era, there were “trade cards.” Trade cards were typically two-sided cards with art on one side and information on the other side. The content could be fun, humorous, useful or handy. They were an important part of pop culture of the day. The goal was to carry an advertiser’s brand and get people to collect the entire series. Cigarette manufacturers eagerly seized on trade cards as a way to spark repeat purchases.

Here’s a link to a gallery of vintage household hints from Gallaher’s Cigarettes of Belfast & London on such useful topics as how to make a fire extinguisher, how to extract a splinter, how to clean real lace and how to stop a runaway horse. We’ve excerpted a few below. 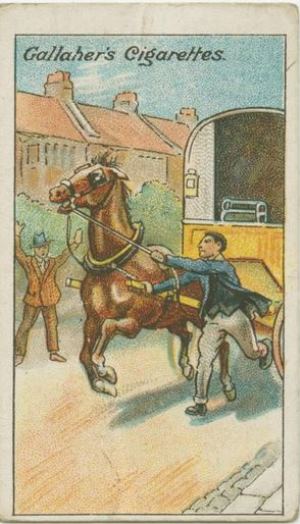 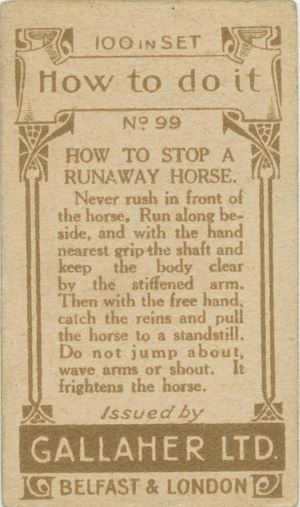 How to blow a brick over 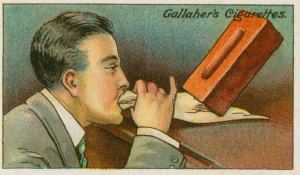 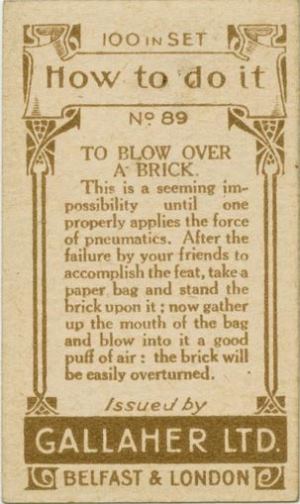 How to treat squeaky boots 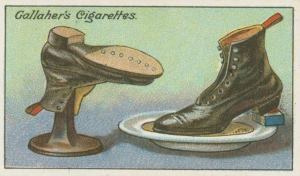 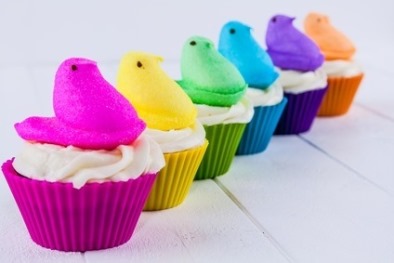 When some people think of Easter, they think of bunnies. Wrong. We think it’s all about the Peeps. Did you know that about 5.5 million peeps are made every day, for a total of about 5.5 billion in 2014? Learn more interesting peep facts in 20 Delicious Facts About Peeps. You can also see some of the science behind Peeps at Peep Research, where the little chicks have been put to various risk and stress tests to see what happens.

To get in the spirit of the week, we thought our readers might enjoy some of these Peep recipes.

How to make homemade marshmallow Peeps – You can actually buy peep molds. An adventurous cook tries her hand – see the step-by-step recipe with pictures.

How to Make Chocolate-Covered Peepsicles – “…skewered on a stick and covered in luxe chocolate and coconut? Definitely better than eating them plain.”

How to Make Peeps Infused Vodka – In this video, you’ll see how to make Peeps-infused vodka. Perfect for a lemon drop martini, this bright yellow cocktail starter will add marshmallow-flavored fun to your favorite mixers. For best results, float a fresh Peep in your martini glass!

Peep stuffed brownies – “Since they’re pretty much a marshmallow I knew they’d be incredible stuffed into a fudgy brownie. I mean chocolate and marshmallows are a natural together. They melt beautifully inside the brownie and add a little extra gooey-ness.”

For the ultimate in Peeps cuisine, see PEEP THIS: 18 Ways to Drink + Eat Marshmallow Peeps on Easter.

We close with just a few safety reminders. If you conduct any Peeps kitchen experiments, take precautions to avoid any kitchen fires. And if you plan to imbibe any of that Peeps-infused vodka, be sure you have a designated driver! 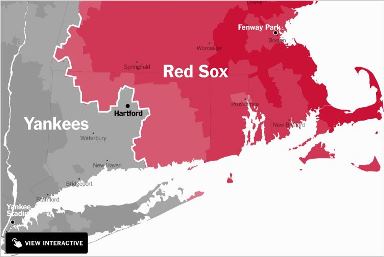 Via the New York Times

Here in New England, we live on a fault line that could result in earthquakes, yes — but there’s an everyday fault line that wreaks a certain amount of havoc every baseball season: We’re talking Red Sox vs Yankees, folks, it’s the stuff of legends. Now you can map that baseball rivalry out with a fantastic feature from the New York Times, Up Close on Baseball’s Borders. There’s a U.S. map, as well as 14 sectional maps detailing baseball’s biggest rivalries. They’ve aggregated Facebook data down not only to the county level, but also to ZIP codes to show how the fans and the borders breakdown. Always wondered whether Hartford and New Haven are Yankees or Sox fans?

Steve Rushin of Sports Illustrated has called the line running through Connecticut that separates Yankee fans and Red Sox fans the Munson-Nixon line. Mr. Rushin came up with the name — in honor of the late Yankee catcher Thurman Munson and the retired Red Sox right fielder Trot Nixon — in 2003, and he had to guess where the line ran: “north of New Haven but south of Hartford, running the breadth of central Connecticut.”

We don’t have to guess anymore.

And what’s all this got to do with insurance?

Well, here at Renaissance Alliance, we have independent agency members dispersed throughout New England. Most insurance shoppers pick a local agency to work with based on factors like convenience, service and reputation … but now with this interactive map, you have a new tool to target your agency selection — by geographic baseball team loyalty!

This crow knows how to deal with the snow – it’s having a blast “crow”boarding down a roof. Crows and ravens really enjoy the snow – they like to take “snow baths.”

While we humans can also enjoy the snow, first and foremost, we have to take care of business. Here are some resources to help you cope.

Sharing the road with snowplows – common sense tips for driving safely near plows and heavy equipment.
Brrr… are you prepared for the cold if your car gets stranded? – if you do have to drive in storms, here is some advice on what to keep in your car emergency kit
Snow shoveling and snow removal safety – basic tips to help you avoid problems from shoveling.
Are you ready for snowy, icy roads? Hone your winter driving skills – a fun way to brush up on your seasonal skills and maybe even learn something new
Dealing with ice dams and other winter weather hazards – advice should you have ice dams or snow overload problems post storm.