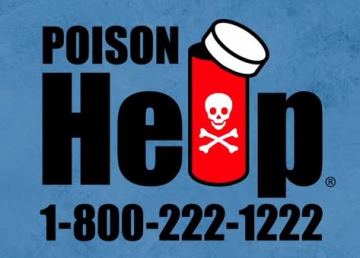 March 15-21, 2015 is Poison Prevention week – if you do one thing, program the Poison Help telephone number in your phone: 1-800-222-1222. You never know when it could come in handy for you or someone else. Calls are free and confidential and can be translated into 161 languages. Most calls can be handled over the phone and don’t require a hospital visit. Plus, you can call for information about chemicals and their safety, too – a call doesn’t have to be for an emergency.

Here are some handy tools for poison prevention and emergency response:

The AAPCC offers this chart to help poison-proof your home.

Button batteries are toxic and may cause serious injury to your child if swallowed. We find these micro batteries in more and more common products from remote controls to greeting cards. While some used in toys are secured, many are more accessible and parents need to take particular care to keep products with batteries away from small children.

Single portion laundry packets are also alluring to young children – they often are packaged in bright, colors, are squishy to the touch and also smell good. They are attractive and may seem like candy or toys to kids. It’s important to store them properly.

Calling 1-800-222-1222 will connect you to a poison center that serves your area. Poison centers are open to take your call 24 hours a day, 7 days a week, 365 days a year, in 161 languages, as well as from the hearing impaired. You can also find a Poison Center near you on this clickable map.

Over the weekend, a NY restaurant manager quickly succumbed to carbon monoxide (CO) poisoning and another 28 people were rushed from the restaurant and treated for symptoms. The CO leak was serious enough that first responders felt light-headed on entering the building.

A few days later, a tragedy-in-the-making was narrowly averted at a time-share resort in Ogunquit Maine, where 21 people were poisoned by CO. You can read the scary story of a Connecticut couple who were poisoned and nearly succumbed. They experienced flu-like symptoms and lethargy. After the man passed out and broke his nose, they left their room to go to a drug store. On the way, they told the the front desk manager about their symptoms. His wise call to 9-1-1 probably saved 21 lives.

And now we hear that an Idaho family of four likely died of CO poisoning.

These experiences highlight the importance of having working CO detectors in both residences and public buildings. Every year, an estimated 400+ people die from carbon monoxide poisoning and thousands more are treated at hospitals. Often called “the silent killer,” CO is an odorless, colorless gas that can leak when fuel-burning appliances like space heaters, water heaters, and generators malfunction. It can also build up quickly when cars, grills, lawn-mowers and other fuel-burning machines are used in confined spaces.

Here is some advice from the New York Department of Health:

Symptoms of Carbon Monoxide Poisoning
Source
Because CO is odorless, colorless, and otherwise undetectable to the human senses, people may not know that they are being exposed. The initial symptoms of low to moderate CO poisoning are similar to the flu (but without the fever). They include:

Even seemingly innocuous over the counter medication can be harmful to a child – test your own ability to spot the difference in this Pills or Candy interactive quiz — and if you pass Level 1, move on to Levels 2 and 3.
The point of the game is to raise awarness about how attractive medications can appear to toddlers. March is Poison Prevention Month, which has a goal of raising awareness of the dangers lurking in our homes. More than 60,000 young children end up in emergency departments every year because they got into medicines or household products while parents or caregivers were not looking. 90% of poison incidents happen at home in kitchens, bathrooms, bedrooms, and laundry rooms; more than half of all incidents happen to kids under the age of 6.
Here are some household items to watch out for:

The Label It Foundation reminds us that poisonings can happen to people of all ages – they offer a sheet that breaks down age groups and the most common types of accidental poisons for that age group.
Keep the Poison Control Emergency Number in a handy place in your home and on your smartphone For a poison emergency in the U.S. call 1-800-222-1222
Here are some resources. If you have kids, these will help you keep you do a home audit to ensure your kids are safe. Even if you don’t have kids, why not help spread awareness by posting infographics, fact sheets or games on your Facebook and Twitter pages?
Poison Prevention Fact Sheets
American Association of Poison Control Centers
Up and Away Campaign
Apps for Poison Control and Drug Reference
Poisons In Your Home Infographic
Kids Act So Fast – So do poisons Infographic